Father John Misty at The Neptune

Last night, J. Tillman and co. (Father John Misty) took the stage for the second time this week after playing a Starbucks sponsored show with The Walkmen earlier this month. Tillman delivered more than anyone expected with expert showmanship, a cordial tone, and zero sarcasm. none.

Its hard to even write about what I saw last night, as I was completely geeked out over Father John Misty, who’s album, Fear Fun, released last year, has taken the indie throwback scene by storm. FJM played most of the songs off their record, and during their encore, Josh T introduced the audience to a new track, possibly named “Honey Bear”. Not sure what the real name is, but that would make sense.

There is an element of FJM’s live show that is so memorable and special. I can’t tell what exactly it is, but I’m pretty sure it has to do with the bottle of Merlot Josh T. consumed throughout the evening, or the casual way he interacted with his fellow Seattleites (Tillman once lived in Seattle). Either way, The whole evening was spectacular. The crescendo of the show, in my opinion, was when they played “Hollywood Forever Cemetery Sings”.

The band played the song as usual, but then burst into a super harsh cacophony of noise, feeding back, shredding the hell out of their guitars, while the drummer sat back in the same beat of the song. Strobe lights flashing, so confusing. Then Tillman comes out and ends the song all soft and smooth. 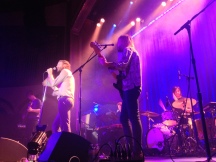 One thought on “Father John Misty at The Neptune”