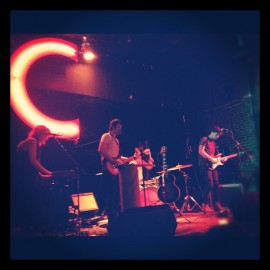 The Horse Thieves at The Comet Tavern

I got a chance to play a show with The Horse Thieves this last weekend at the Comet and holy crap; what a fun show that turned out to be! I had seen them play Chop Suey about a month and a half prior and thought they were awesome. Their live show is awesome, but even better, their album is even better.

But we’ll get to that.

The Horse Thieves hail from Spokane (which isn’t Seattle. I get that.), but rumor has it that the 4 piece band will be moving out west later this month. Their musical style is one of those things that’s hard to pinpoint. If you took Americana at it’s purest root and added reverb and huge builds; you would have something like THT…kinda.

I’ve really never heard an album like this. Marshall and Adam’s voices contrast each other in such a cool way, where each song feels like a new adventure. Another sweet part of their band is that everyone sings-bringing harmonies that would make even the most tone deaf fall to their knees.

“Valley of Desicion” is an interesting album. It starts out with “Throw the Dice”, in my opinion one of their best tracks. Marshall’s lyrics tell such a deep story and you feel like you have known him  and know the situation he’s singing about.

It’s hard to talk about an album when you literally love every track on it. From “Throw the Dice” to “This will always end” and “O’ River”, the diversity of this band while staying true to their roots is amazing.

I think the most diverse track on the record, and probably my favorite is “Walking on a Wire”. Adam Miller’s vocals on this track are awesome. I didn’t know that THT would have a track like this, but when they played it live, I was blown away.

You can get their album, “Valley of Decision” by The Horse Thieves on iTunes or on their website.

Look for them in Seattle within the next few months!